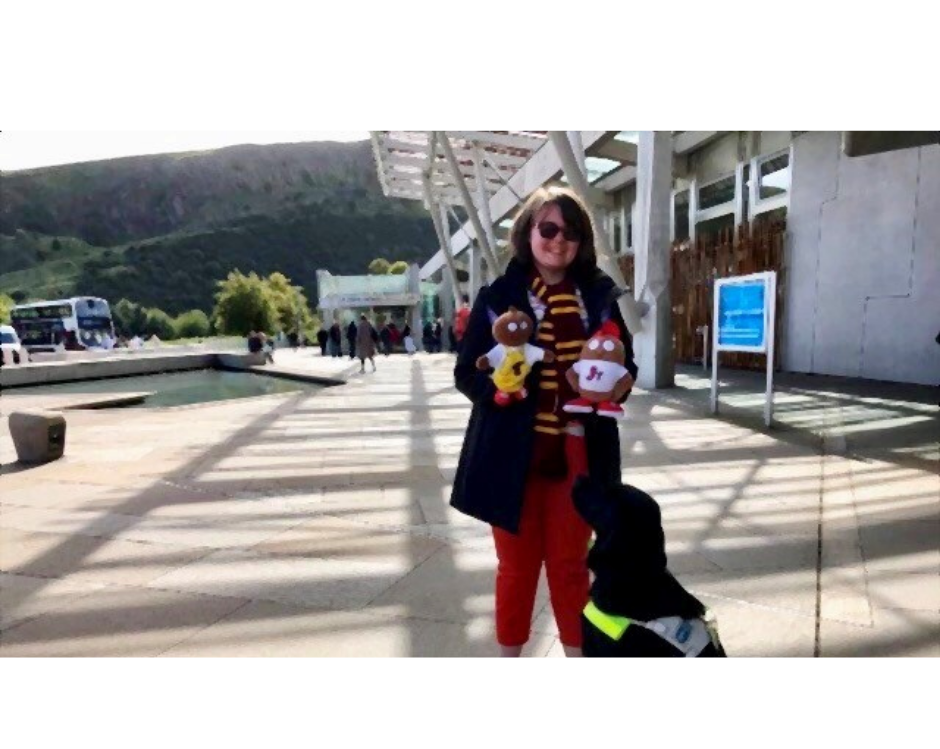 Working with the Scottish Youth Parliament to raise awareness

Eilidh Morrison shares her experiences of campaigning and raising awareness, working with the Scottish Youth Parliament.

“I’m Eilidh and I have Retinitis Pigmentosa (RP) and Ocular Motor Apraxia (OMA) which both result in my having 3% vision in the centre of my eye on a good day. I say on a good day due to having RP, which makes my vision fluctuate. I have recently started university at the University of Aberdeen, studying a BSc in Physics which has really upped my independence.

I have always been independent since I was 12 years old, getting on a train to Edinburgh on my own to go to my first Haggeye meeting (which is the Youth Forum for RNIB).  A lot has changed since I was 12. Instead of just being a member of Haggeye, I am one of the Members of the Scottish Youth Parliament (MSYP) and I campaign for visually impaired people’s rights through lots of different issues. One of the main focuses recently is my motion that I passed at a Scottish Youth Parliament (SYP) sitting, where we debate our topics and then MSYP’s vote on them. My motion is about how guide dog owners have to go abroad for holidays or work without their guide dog, since the 1st January 2021. This is a big safety violation, as blind people cannot feel safe when traveling, and this is why it is a big issue. This motion reached Westminster in December last year for which I was very impressed with myself. To watch the thing that I had been campaigning on for just over a year be debated in Westminster was pretty cool.

This is not the only issue that blind people face. I am the Depute Convener of the Jobs, Economy and Fair Work Committee, which means I do a lot of work relating to jobs and one of my focuses in the committee is on getting blind and visually impaired people into work. Right now, the statistics for blind people in work is 1 in 5, which is not a great statistic and even if we manage to change that to 1 in 4 it would be a huge achievement. Blind people should be given the same opportunities as sighted people. Gaining equality for our community will take time but I’m so happy to say that I’m helping to break those barriers down.

I, like others, will say I did not have a great school experience, and that’s why I jumped on the opportunity to become part of the Scottish Qualifications Authority (SQA) learners’ panel where I get to speak directly to the SQA.  This is amazing because together we are making changes to the curriculum and education – I have talked at our meetings about equality for the blind community in education as the job statistic from above lies on the shoulders of our bad education.

I have been an MSYP for two years and was re-elected in November 2021 which means I have another two years to be a part of this movement and in these couple of years I have grown in confidence. I used to be the kid who stayed in the corner of the room not speaking to anyone, or even making eye contact, but now I am standing up in front of many MSYPs talking about what I’m working on. I’m going to Parliament and getting to talk to decision makers and so much more. I am also increasing my independence because, for our meetings, we meet all over Scotland where I travel either by myself or with my guide dog.

Well done on all of your achievements, Eilidh, we look forward to hearing more about the work you are doing.

Image for VOLUNTEERS WANTED IN DUNDEE AND ANGUS

VOLUNTEERS WANTED IN DUNDEE AND ANGUS