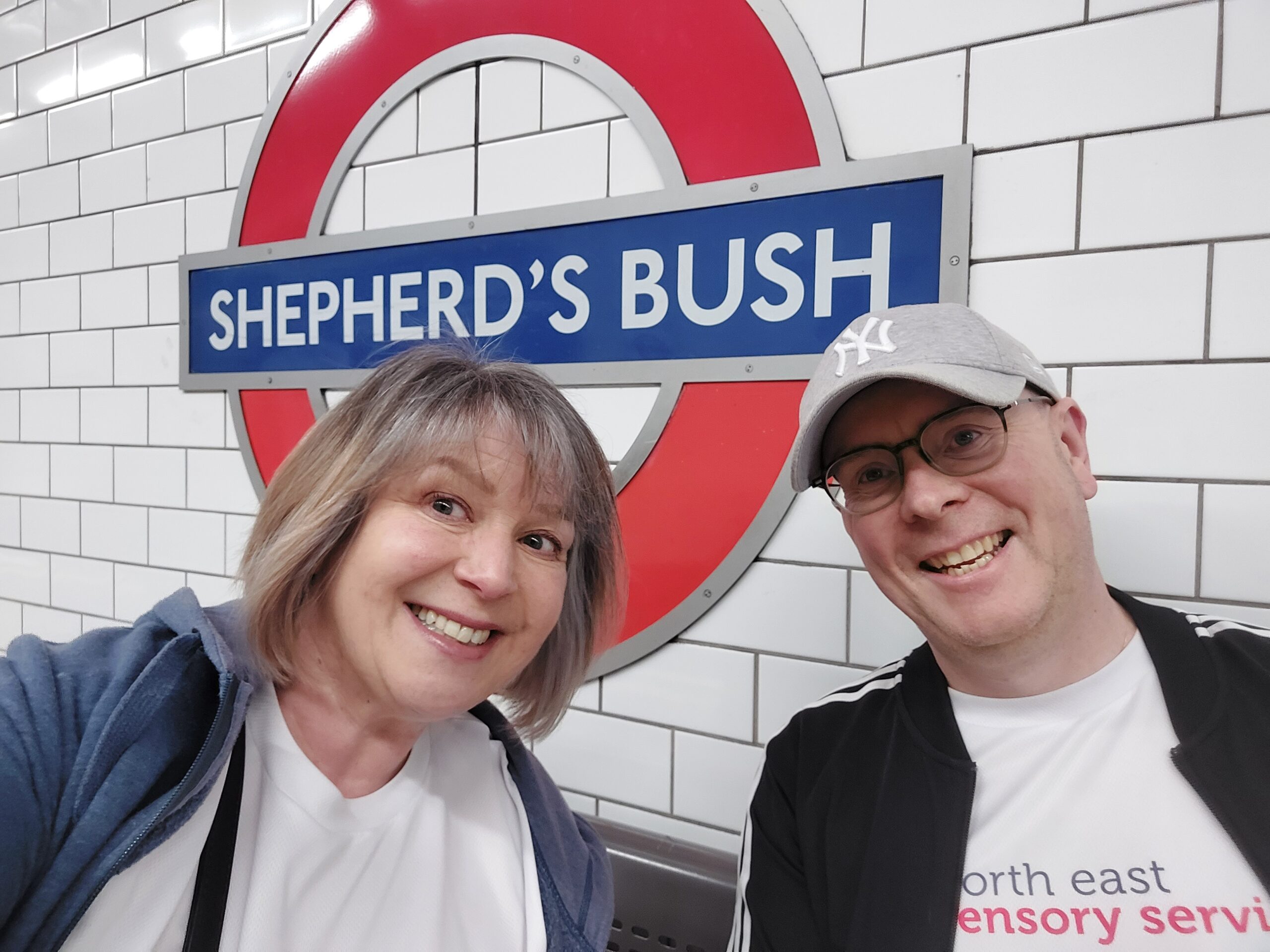 Over £1,800 raised for NESS through the London Tube Challenge

Home News Over £1,800 raised for NESS through the London Tube Challenge

Garry Ritchie and his family friend and sighted guide, Tracey Morris, spent a total of 13 hours visiting all London’s tube stops and absolutely SMASHED Garry’s fundraising target of £500 by raising over £1,800 for NESS! A massive thank you to Garry and Tracey for their hard work which supports NESS towards our goal to achieve independence for Blind and Deaf people.

Read on below for Garry’s travel blog:
Tube Challenge 2022 (24/25 March), to raise funds for North East Sensory Services (NESS) started with a flight from Inverness (with the obligatory gin in the airport lounge) to London Luton, then a transfer to our starting point at Watford.

A hotel was booked within walking distance of Watford underground station to allow an early start in the morning. If the excitement wasn’t enough to keep me awake the moth-eaten hole in the curtain let me know the sun was up. Obviously, I can’t mention the hotel, but it certainly wasn’t premier, more like 2nd division.

We walked the half mile or so to the station bright and early full of excitement at finally getting started after months of planning. It was really happening; bring on the challenge.

We took in the beautiful sights of Metroland before leaving the Metropolitan line at North Harrow for a walk to Rayners Lane. Then came a few line changes on the Piccadilly, District and Central lines before another walk from West Ruislip to Ickenham, with more beautiful scenery in what seems worlds away from inner city London.

Back on the Metropolitan line for a few changes taking in the line end at Uxbridge and a walk from Northwick Park to Kenton. Northbound on the Bakerloo to Harrow & Wealdstone before heading south to Elephant & Castle. 1972 stock tubes are not the comfiest or airiest for a near hour long journey, but we survived.

Northern line closures due to the Bank station upgrade meant a walk and a bus to London Bridge taking in Borough station to ensure no stations were missed. Onto the Jubilee for the first time, west then east to Alf Garnett’s stomping ground West Ham.

Upminster next to tick off the end of the District line. Who knew it had a huge windmill? We do now. All the way back to Tower Hill. The only part of the challenge where doubling back for a lengthy period can’t be avoided. A short hop to Aldgate and onto the Circle line. North, west, east; the stations now becoming a bit of a blur.

Victoria to Brixton next. A journey enlightened by a lady standing in front of the ventilation window, hair blowing like the dog off the AA advert. Back to Stockwell then onto Kennington for the only mistake of the challenge. In a rush to see the newly opened Battersea Power Station we boarded the Morden tube. Off at Oval (see you again in a few minutes) then correctly to Battersea Power Station before returning to Kennington (deja vu). Was this like the old days of falling asleep on the Kennington loop?

Southbound to Morden correctly this time, flagging a bit now with mind on what was for dinner. The 93 bus to Wimbledon next. Not sure where to go so again helped by a Transport for London (TfL) member of staff. Adrian you were fantastic!

Wimbledon to West Brompton with thoughts of a cheeseburger and chips consuming my every thought, where the support crew duly obliged. Only an hour or so to go now and fully fueled ticked off the District terminus at Edgware Road. Round the loop to Earls Court via Hammersmith and day one was complete………….and relax with a gin.

Day two started in sunny West Brompton with an overground trip to Shepherds Bush, (why does a shepherd need a bush?) Woodford via Hainault on the Central line for over an hour so no rushing between stations this morning. Another terminus at Epping in the bag we headed south to Snaresbrook for a sunny walk to Wood Street, the first of only two walks today.

More line and station hopping to take in another end of line at Edgware. A great place to grab a sausage in a roll. Why does the Northern line have so many termini? Designed by a child with a crayon I think.

A walk to Canons Park in the London heat to allow a single northbound stop to Stanmore on the Jubilee line, another terminus ticked off the list. Down to Baker Street next. My favourite station of all, steeped in history with Gerry Rafferty playing in my head. A photo opportunity is a must here.

Moorgate next to High Barnet via Mill Hill East on the Squiggly line, sorry Northern line, and another terminus. That’s all five in the bag. Woo-hoo! Now for the bus 384 to Cockfosters. A bus that had changed its mind on picking us up. Not to be deterred the 307 would do to Oakwood. What is one more change when we are completing so many?

Disaster! News from the support crew signal failures are severely disrupting the District & Central lines. As we disappear underground with no communication, we have to make a decision. Stick to the plan or carry on to Heathrow and hope we can complete the rest later. The gods that had been shining on us all day were now against us. Keep calm and carry on………Heathrow it is.

As we head towards Heathrow we are joined by the support crew at Hounslow Central. We must be looking weary by now but keeping our fingers crossed the engineers have fixed the signal issues. After a quick photo at Heathrow Terminal 5 we jump back on the tube and head to Acton Town. We can almost touch the finish but a few stops to go. Turnham Green and change for Richmond, the revised finish. We can count the stations on one hand now.

Finally, a train to Richmond. Three, two, one……… we did it. Tube challenge 2022 for NESS complete. A total of twenty-four hours on the challenge over the two days but worth every mile for a great charity.

A burrito for dinner……………now where’s my beer!

Image for Come along to a NESS Open Day

Come along to a NESS Open Day