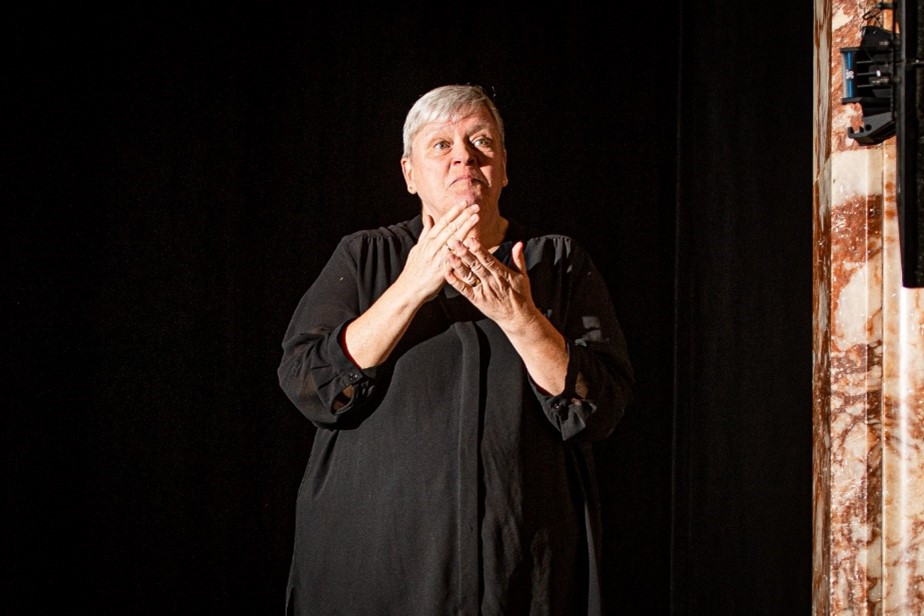 “Recently I had the opportunity to see one of my old favourites, ‘The Steamie’ at Dundee Rep Theatre. On the stage, supporting the performance, was Lesley Crerar, British Sign Language Interpreter, who added a joyous interpretation of the play for the audience. At the end, the cast got rapturous applause for their funny and emotional performance, but the biggest round of applause was for Lesley – there were some deaf people in that night, but the hearing audience had obviously gained from her presence on the stage too. I met with Lesley to find out about her experiences of theatre interpreting.

Lesley started her work life as a psychiatric nurse working in Cornhill Hospital, Aberdeen. There she worked with a patient who was profoundly deaf, and Lesley realised that she needed to learn sign language if she was to understand and communicate well with them. This was the start of Lesley’s 20-year journey into British Sign Language.

Through her training she has met many deaf people and raised awareness of the needs of deaf people particularly in the health care setting. She now works in the community in all sorts of places from medical appointments to educational settings ensuring that deaf people can access services with the correct communication support in place for them to understand and be understood.

Along the way, theatre has been an enjoyable challenge – she needs to read the script multiple times and begins preparing a month before taking part, watches performances where possible and listens to songs until she is fed up with them! Interpreting is about communicating the meaning of spoken language and theatre uses lots of metaphors, puns and plays on words. It takes skill and effort for the interpreter to translate into visual BSL in a way that is also accessible and enjoyable for deaf people. A play like ‘The Steamie’ is all about timing, dialect and cultural references and Lesley needs to capture this and match the emotion and attitude of the cast.

Some plays such as Shakespeare take a lot of prior preparation, where for pantomimes, the need to be flexible is important as the cast will ad lib the script. For songs, she is sometimes given an in-ear monitor for voice feed so that she can hear the singer over the orchestra.

And what of the audience? Lesley says she feels most nervous when there are deaf people in the house, as she wants to ensure they can have the best time. Sometimes there will be no deaf people there, but as Lesley points out, often she just does not know who is beyond the footlights; there may be deaf people she does not know, or people who are learning BSL. There might be grandparents of a newly diagnosed deaf baby, and letting people witness the beauty of BSL, its ability to communicate and engage people, raises awareness of the language and the needs of the people who use it, allowing them to take part fully in life.

You can watch Lesley in this video, which is in BSL with subtitles, talking about her experiences after being interviewed by the Press and Journal. 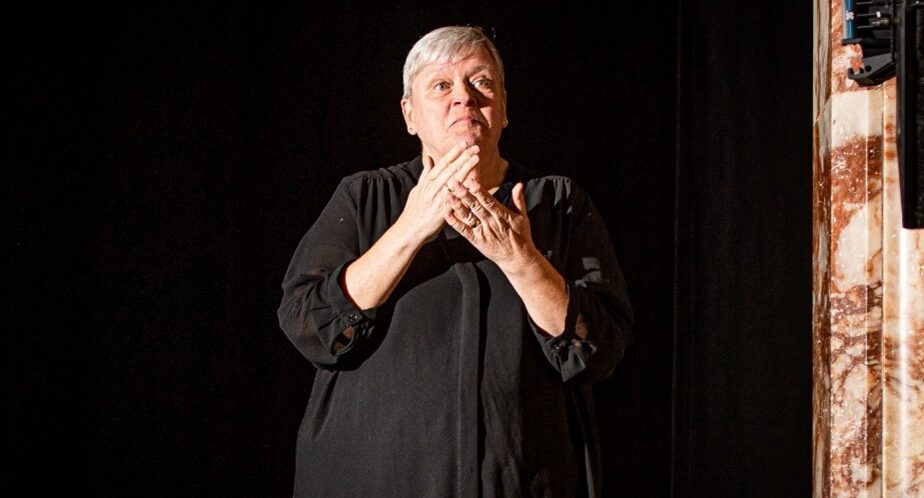